I Wish I Had Stickier Fingers

I’m pretty good about following my own rules. I make rules for myself so that I don’t so stupid shit. I’m not big on making costly mistakes. I like to learn from it the very first time I make a mistake, and then hopefully apply that knowledge to everything I ever do in the future wherever it’s applicable. One such rule, for instance, comma, is that I do not allow myself to hang anything on the wall above my turntable that’s not absolutely secure. Like my badger-hair record brush. It’s off to the side, so that if it were to fall, it would not land on the turntable. See how smart I am?

So let me tell you what happened. And you can decide whether I’m all that smart or not. I was cleaning my listening room. Maybe I was doing a little organizing. A little rearranging. I have this pesky black fidget spinner that’s been hanging around my game room for some years now. Game room. Dice. Pirate coins. Fidget spinner. Makes sense. Anyway, this spinner was sitting on my turntable cabinet, and I had already moved it to twenty different places in my room, and was just getting tired of the damn thing. Why the hell does a 40-something-year-old man have a damn fidget spinner anyway? I don’t fidget. And I certainly don’t spin it when I do fidget. If I were to. So why have it? Because it’s gamey and looks cool? Well, whatever. I set it on top of my game cabinet that’s just to the left of my turntable cabinet.

Later on, while listening to the Rolling Stones “Sticky Fingers”, a reissue from 2019, I think it was – 180-gram record – certainly not worth a lot of money, but a good quality repress – I decided I needed to rearrange the items on the top of my game shelf. Slide one thing down, move one thing to the middle – whatever. So I started sliding a stack of games across, carefully noting the large glass jar full of marbles as it slid closer to the edge. Because I’m no dummy, I’m keeping an eye on it. Right up to the edge… a little more… looking g- BAM. FUCK.

That stupid fucking fidget spinner was right on the edge of the book case. I had forgotten about it, and couldn’t see it. The marble jar I was so smartly keeping an eye on, had pushed it right off the edge. It fell three feet to hit my “Sticky Fingers” record, and it landed right between Dead Flowers and Moonlight Mile, my two favorite tracks on the album. And Moonlight Mile is arguably my favorite ever Stones track. Now there’s a gouge between and into both of those songs. Ruined. 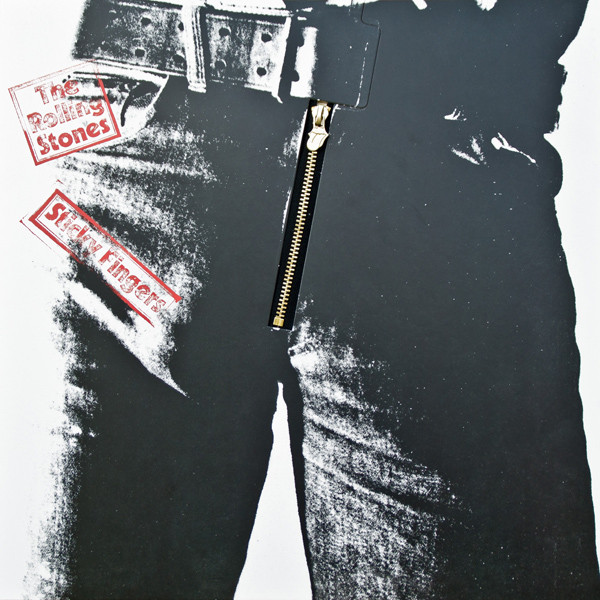 Sigh. Sick to my stomach, I got on Amazon to order another copy right away. But it’s kind of a popular record. So they’re out. The infamous We don’t know when or if this product will be back in stock message. So I set about looking for a Discogs seller, or an eBay seller. Shit. No one has the repress. They’re selling original copies and whatnot, but no reissues. Well, I’ll just look in my local record store. So I went to this place called The Spin – Coffee and Vinyl. I like the dudes who own it, and don’t mind giving them a little cash to help ’em out, instead of the big guy. And if I have to buy an older pressing from someone, I’d rather it be someone like that.

So I go into the Spin and ask the guy, “Hey man, you have Sticky Fingers?” and he says, “That’s the one with the zipper, right?” and I’m like, that’s the one. And I got a little excited. Because I knew I was about to pay upwards of 50 or 60 bucks for an old and possibly original pressing. But I was punishing myself for being so stupid and ruining my 28-dollar copy, by forcing myself to buy a collectible. Which I’m usually not interested in. I just like music. I don’t care about the value of the platter. Well he goes digging in the back and comes back out and hands me the record. Zipper and all. I got chills. “How much?” I ask him. He shrugs and says, “Hundred bucks?”

I should have spent a little more time finding out what it was worth. But eff it. I want the record, and I’m helping out a small business. So I hand him my hundred-dollar emergency bill I keep folded in my wallet for times like this where I need to buy something that costs a lot but don’t want the wife to know how much I just spent on one fuckin’ record. Well, I took it home and cleaned it and listened to it, and it plays, but it sounds like 1971. That dust you just can’t get out, and the groove wear were pretty significant. It sounded like it was a collector. Not in NM, or even close.

When the wife got home, I told her I had found a copy, and she says to me, “Oh, I was waiting to hear back from Merlin and see if he had one, but good. I’m glad you found one.” Oh. Yeah. I had forgotten she knows a guy – yes, his name is really Merlin – who owns a record shoppe in Chicago. So she checked her messenger and – yup, sure enough, he has one. 1971 original pressing with zipper and everything. Mint condition. Forty bucks. Gulp.

Nothing is mint, honey. But if he’s wrong and it’s NM or VG+, it’s still a fuckin’ score. “Order it,” I say. I can’t let that go. There’s apparently a sweep around the country of people buying up every existing copy of this damn record. Well, it finally got here a couple of weeks later, and I slip it out of the sleeve. It ain’t mint. It’s near mint though. It’s in great conditi- wait. What the fuck is that? There’s a manufacturing blemish on it… It’s a tiny little dent… RIght… it looks like it’s right on… It’s … FUCK SAKE. IT IS. It’s right on Moonlight Mile.

So now I own three copies of “Sticky Fingers” and not one of them will give me a crisp, clean play of Moonlight Mile. I guess I’m destined to have to do my Triple Crown Night using a CD or Spotify. (That’s the night once or twice a year where I listen to “Beggars Banquet”, “Let it Bleed” and “Sticky Fingers” all in a row. You know there have been several rock historians who said those three records marked a perfect lineup of Rock & Roll, and the best 3 records recorded in a row in the history of rock.)

I have learned my lesson though. I will never again put anything up there that can find its way to the edge of a bookshelf that is right next to my turntable. I’ve also knocked my tone arm across the platter and ruined a several-hundred-dollar stylus. But that’s just going to happen. It comes with mixing whiskey and records. And you know I’ll never stop doing that.